Investing is your key to achieving financial goals, and one proven way to do that is to invest in stocks. What matters most, though, is that you pick the right stocks and hold on to them for years, through market ups and downs, to allow the power of compounding to work its magic. It’s only then that you’ll be able to build real wealth.

But where do you find such stocks that could make you good money in a matter of years? Here are three to start with, each with jaw-dropping growth potential.

This multibagger stock won’t let you down

American Water Works (NYSE:AWK) is a famously boring stock, but you wouldn’t want that to influence your investing decision if you knew this stock is a proven multibagger. It has what it takes to rally even higher in the years to come. Here’s why.

First, American Water treats and delivers more than a billion gallons of water every day, so that business will stay put come what may. Second, it has predictable capital deployment plans that almost assure earnings, and with earnings comes dividend growth. That’s bound to reflect in the stock price. Third, work on President Biden’s aggressively campaigned infrastructure bill is already under way, and clean water is one of his top priorities. American Water Works is in the sweet spot.

American Water plans to spend nearly $22 billion to $25 billion over the next decade, primarily on upgrading its infrastructure. That’s crucial to win regulatory approval for rate increases, which it can then pass on to its consumers. Aside from regulated capital expenditure (CapEx), American Water is also keen to pursue acquisition opportunities to bolster growth. The company has made 106 acquisitions since 2015.

The company foresees 7% to 10% compound annual growth over each of the next five years in earnings per share (EPS) and dividends. American Water is a best-in-class utility dividend stock, having increased its dividend every year since going public in 2008. Those dividends have greatly boosted the stock’s returns over the years — a trend I believe is here to stay. 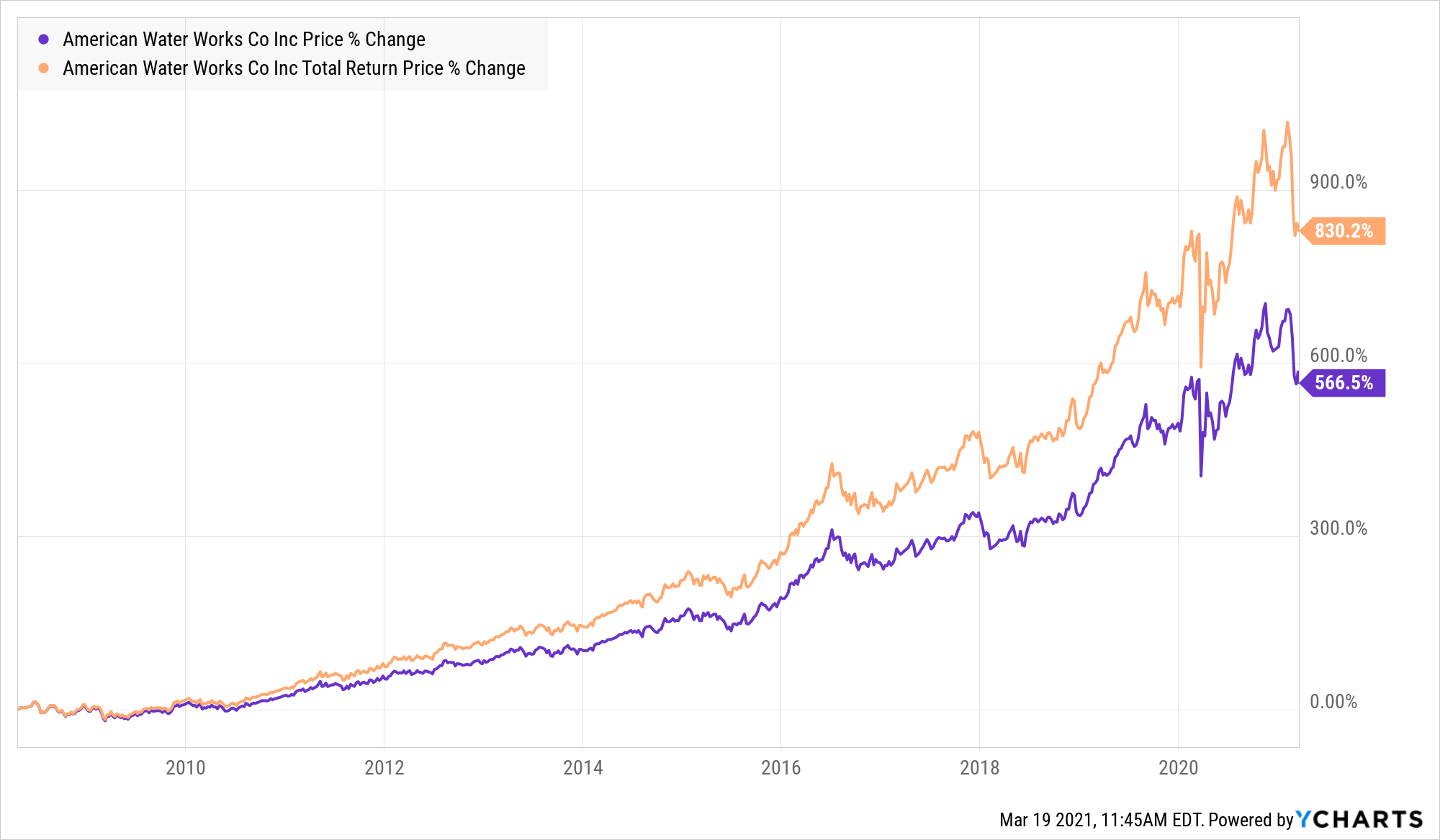 Time is ripe to invest in renewable energy

Brookfield Renewable Partners (NYSE:BEP)(NYSE:BEPC) wants to grow its annual dividend by 5% to 9% and deliver 12% to 15% annualized returns in the long term. That’s an easily achievable goal given the massive growth opportunity ahead for the company as the world shifts from fossil fuels to clean energy. With Biden also proposing a monster climate plan emphasizing clean energy, Brookfield is a surefire winner in the making.

Brookfield is one of the world’s largest publicly traded renewable companies and among the best you could find to bet on in the industry given its diversity: The company primarily deals in hydropower, but it has recently expanded into solar and wind energy such that hydropower now makes up only about 66% of its portfolio. In fact, management foresees solar to be a major contributor ten years from now. Brookfield is sitting on a humongous pipeline of nearly 23 gigawatts of power from renewable energy as of the last quarter, which is almost 20% larger than its existing installed capacity.

Brookfield has had such tremendous growth in the past that it’s been able to pass on a big part of its profits to shareholders in the form of regular dividend increases. With management already committing to future dividend growth, you could comfortably beat the market in the long term with this stock.

The war on cash is heating up

The coronavirus recession hit Mastercard (NYSE:MA) last year, but it didn’t take the stock too long to regain its mojo: Mastercard shares reached an all-time high earlier this month. If you’re wondering how much bigger this $364 billion market-capitalization company could become, the sky is the limit for one simple reason: the ongoing mega shift from a cash-based to a cashless society. As one of the world’s largest payments-processing companies that makes money on every transaction using its cards, Mastercard is sitting on an explosive growth bomb. As of Dec. 30, 2020, the company had issued 2.8 billion Mastercard and Maestro-branded cards. 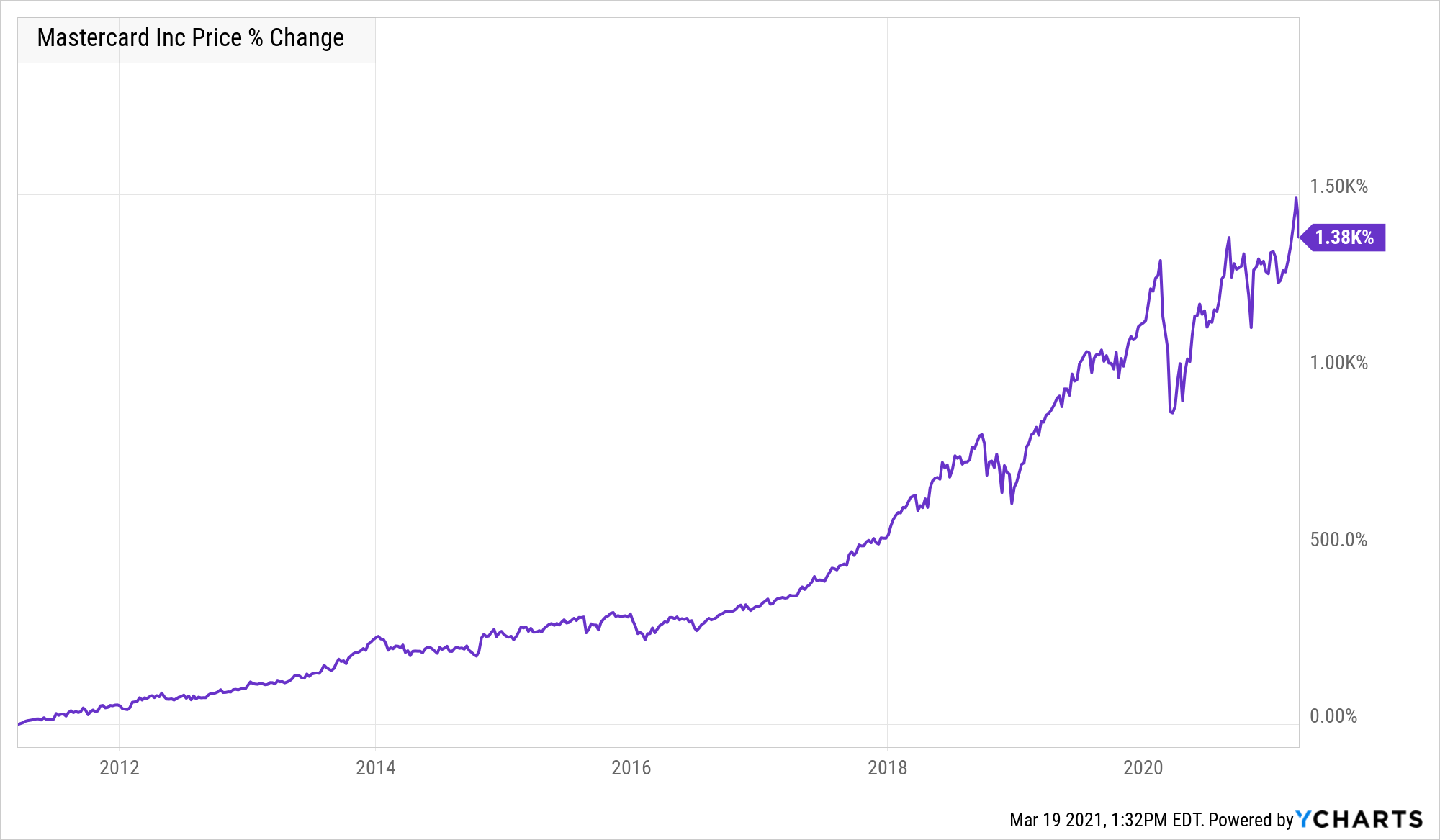 One might question Mastercard’s standing in an ever-evolving fintech industry, but the company has been very adept, innovating and launching products to keep up with the times. Mastercard’s cryptocurrency program is a fine example; it includes crypto cards and facilitates cryptocurrency transactions on its network. The company is also striving to create multiple revenue streams beyond its traditional business, such as bank-to-bank money transfers and business-to-business payments — addressable markets worth billions of dollars.

With so many growth drivers ahead, Mastercard should be able to generate sky-high operating margins and boatloads of cash like it has in the past. The stock has had a phenomenal run-up in the past decade, and its future looks just as bright.

The best thing about owning Brookfield Renewable Partners, American Water Works, and Mastercard is that you don’t have to worry about where their growth will come from. These companies know their jobs, and they know exactly how to exploit opportunities — and that’s exactly why their stocks could fetch you handsome returns in the long run.

This article represents the opinion of the writer, who may disagree with the “official” recommendation position of a Motley Fool premium advisory service. We’re motley! Questioning an investing thesis — even one of our own — helps us all think critically about investing and make decisions that help us become smarter, happier, and richer.

The Last of Us HBO Show: Season 1 Adapts the First Game, But Will ‘Deviate Greatly’ in Some Episodes

Stock Markets Rebound, but What the Heck Just Happened to Streaming TV Stocks?

Legendary investor Jeremy Grantham says the stock-market bubble might burst earlier than Might in a brand new interview. Listed below are the 16 greatest quotes. | Foreign money Information | Monetary and Enterprise Information

Why Is Joe Biden Clinging To Reefer Madness?