Just off U.S Hwy. 64 on Harold Hart Road last Saturday, a line of cars began to wrap around St. Julia’s Catholic Church shortly after 10 a.m. There, a few yards behind the church, hundreds of Hispanic residents cracked open their windows, rolled up their sleeves and received their first dose of protection against COVID-19.

In total, the drive-thru vaccination clinic — spearheaded by the Chatham County Public Health Department and the Hispanic Liaison — administered 280 first doses of the Moderna vaccine. Leading up to the event, they’d originally scheduled 320 appointments.

“We had some no-shows and were able to vaccinate some later in the day who were not on the schedule,” said Mike Zelek, Chatham’s public health director. “No-shows aren’t uncommon, and we are grateful to all who came and the many who made the event successful.”

And the first person to get a shot there Saturday morning? Franklin Gomez Flores, Chatham’s first Latino commissioner.

“To me, it (the vaccine) brings hope,” he told the News + Record immediately after being administered the vaccination. “A lot with what’s going on, with what my family’s gone through, what the community has gone through, it’s hope to actually get things going back to how they were before COVID.”

Originally, Gomez Flores said he’d planned to wait to get his shot “to allow enough vaccines (to be) available for the public.” Then he realized just how many people, particularly Latinos, still worried about getting a shot.

“That’s the reason I took it,” he said, adding, “I wanted to get vaccinated as soon as possible because I realized that a lot of my community members weren’t getting the shot. And so, I shifted my mentality to try to encourage others to do so.”

Health department staff and volunteers set up four stations around the church. Manned by bilingual volunteers primarily from the Hispanic Liaison, the first two stations checked people in, confirmed their appointments and checked over their forms.

Behind the church, nurses approached car after car, administering the shots at a third station as cumbia music blared in the background from nearby speakers. Near the exit, staff set up a fourth station to monitor those vaccinated for any allergic reactions.

Volunteers came from a broad swath of organizations and local government commissions, including the Chatham County Community Emergency Response Team (CERT), Chatham Literacy and the county’s board of health. Gomez Flores volunteered after receiving his first shot as well, and most, if not all, of the Hispanic Liaison’s staff helped out with the event.

“(They’re) a lot of our clients, and that way they can see our faces,” said the Liaison’s Hannia Benitez, deputy director for the organization’s Lee County office. “I go there and be serious, but at the same time, I’m all over the place, like, ‘Hey!’ I know that’s what I would want if I’m nervous.”

After all, reassuring people, she said — especially those who “taking that step of faith in not only the agency, but the vaccine” — counts among one of the Liaison’s biggest goals for the St. Julia clinic.

It’s also about bringing a mass clinic directly to the underserved members of the community, she added.

“We’re just excited to have this event for our community,” Benitez said. “Hopefully, this is a stepping stone for other people to also get their vaccine.” 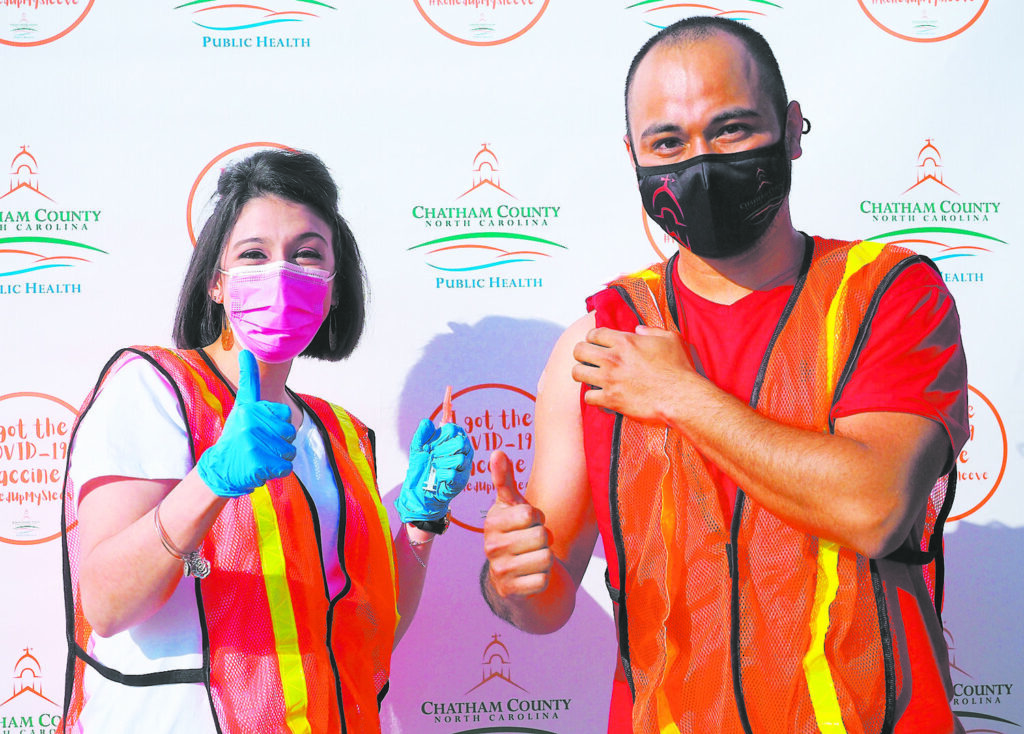 ‘It was very, very strategic’

Preparations for the clinic began about several weeks ago in early to mid-March, according to organizers.

On March 12, StarMed Healthcare took over the health department’s mass vaccination operations at the Ag Center in Pittsboro, Zelek said, granting the CCPHD “much needed capacity” to carry out more targeted outreach to the county’s minority communities.

“We know that extra effort like this can really make a difference, especially when we’re talking about populations that may face barriers,” he said, “and I think the Hispanic/Latinx population is one, whether it’s language or connectivity to other options.”

And why host a clinic at St. Julia Catholic Church?

The church’s congregation is more than 80% Hispanic, and the church offers both Spanish and English masses. They’d also hosted several drive-thru events for the community in the past, organizers said, which made the event’s logistics a piece of cake.

“It was very, very strategic,” Benitez said, “because everybody knows where St. Julia is.”

“St. Julia’s is obviously really a centerpiece of the Hispanic/Latinx community,” Horner said, adding, “We had already had conversations and contact with them throughout the pandemic, and so … really, it’s just make a call and work with the pastor there and just get the ball rolling.”

And about three weeks ago, that’s exactly what they did, according to Father Julio Martinez, who’s led St. Julia’s for several years now.

“I jumped at the idea probably immediately,” he said.

The church’s main role is providing the space for the clinic, Martinez told the News + Record.

“I want to give them that freedom, so that they can have the freedom to do this again and again and again, whatever time, whenever they need to do it here at St. Julia’s,” he said. “Our property is at the service of the community and any time that we can be of service to the community, well, I think that’s just great.”

On March 21, right after masses, staff from the CCPHD and Hispanic Liaison set up a table just outside the church and registered nearly 200 people within just three hours, according to Benitez. The Liaison also held another registration event at Country Living Estates on March 24, and by noon the next day, 317 people had registered for St. Julia’s clinic.

“We also did outreach with communities and with other churches as well, so it’s not just St. Julia’s parishioners who (were) getting vaccinated (Saturday),” Zelek said. “There were multiple outreach events in neighborhoods, particularly in Siler City.”

‘It was very needed’

“It was very needed,” she said, “and that came from the feedback that we were hearing from the members of our community.”

Over the past month, she said the Hispanic Liaison has been receiving “an influx” of calls from clients and community members who want to get vaccinated but have struggled to get appointments. On average, she estimated that they’ve steadily received 10 to 20 calls a day asking about vaccinations.

At the beginning of March, they collected a list of 60 people within three days who signalled interest in getting vaccinated, and since then Benitez said that list “kept on growing and growing and growing.” As of last week, they’d helped 185 people, either by providing them vaccine information or helping them schedule their appointments — and that number doesn’t include the people they’d signed up for the St. Julia clinic.

A large group of people, she said, are still hesitant about getting vaccinated thanks to a mountain of misinformation circling around the web inside the U.S. and from Latin America.

“There’s so much misinformation,” she said. “We hear like, ‘Well, they said, we’re going to get mutated.’ I had a person that I called earlier (last) week, and she’s like, ‘I heard that people become zombies.’”

Others worry about having bad reactions, and while staff have been doing the best they can to debunk vaccine myths, she said they’ve still got their work cut out for them. Otherwise, Benitez said, many clients just haven’t been able to schedule appointments.

“A lot of our population are the sustainers of our economy, people that can’t afford to take one or two days off of work to be on the computer and be on the phone to try to finally get a hold of someone,” she told the News + Record. “These are people who are first thing in the morning, like, they’re off at work. They’re not watching their phone, trying to see, ‘Hey, is there a spot available?’”

It’s been particularly hard for the Liaison’s clients to schedule vaccine appointments with Piedmont Health Services, Benitez said — something they’re working with Piedmont to fix. Piedmont tells existing clients to call their health centers to schedule their vaccinations, but according to Benitez, many just couldn’t get through when they called.

“When we first started, we had to put their people, their clients, in their own waitlist,” Benitez said. “And I was hearing that, ‘Oh, yeah, we’re calling them within a week and this and that.’ They weren’t. They weren’t being called.”

Previously, Piedmont CEO Brian Toomey has told the News + Record that Piedmont gets about 3,000 calls a day. Likewise, spokesperson Debra Markley said new patients should fill in the online form so that Piedmont’s phone lines would be open for their existing patients. Around half of Piedmont’s 48,000 patients across seven counties are Hispanic.

“The numbers (of calls) have erupted since the vaccine came out and our patients who want regular medical appointments are having a hard time getting through,” she told the News + Record earlier this month. “It is a system problem, and we are working on solutions.”

Benitez said many clients have also tried to register with UNC’s Chatham vaccine clinic — and some even “prefer UNC,” she added.

“It’s just hard,” she said. “Even UNC patients, when they try to do the My Chart, they’re like, ‘Oh, here’s one.’ Oh! It’s gone. They didn’t have a waitlist. That’s why it’s so hard trying to get into UNC, but we’re also in conversations with them.”

‘It won’t just stop there’

The St. Julia mass vaccination clinic isn’t the first outreach effort to the Hispanic community that the health department’s led — and it won’t be the last.

Besides the mass vaccination clinic at St. Julia’s, the health department partnered with the North Carolina National Guard to vaccinate 70 workers and their family members at Brookwood Farms on March 19 in Siler City. They’ve also transferred several doses to Mountaire Farms’ in-house clinic, an enrolled provider, to help vaccinate their workers, many of whom are Hispanic.

Over the last two weeks, the CCPHD has also worked with the Chatham Health Alliance, Communities In Schools and the Inter-Faith Food Shuttle to go out into a predominantly Spanish-speaking neighborhood, hand out vaccine information in Spanish and sign up people for vaccinations.

“Through the outreach events we’ve done, including these hubs, they’ve had 400 people say they found out about getting signed up for the vaccine through those outreach events,” the Chatham Health Alliance’s Julie Wilkerson told the News + Record last week.

Thirty people specifically cited those events as the reason they knew to sign up, Wilkerson added, “but that’s just people who offered up that information, so it was probably more.”

As of March 29, about 6.8% of all first doses administered in Chatham County had gone to Latino residents. A week ago, 6.3% of the health department’s first doses had been administered to Latinos, but as of Monday night, that percentage jumped to 13.3%. The Hispanic community accounts for about 12% of Chatham’s total population.

“But then it won’t just stop there, of course,” Zelek said. “The work continues.”

Chapelboro.com has partnered with the Chatham News + Record in order to bring more Chatham-focused stories to our audience.

Ripe for rental or an adventure lifestyle

Ignore the Short Squeezes: These Tech Stocks Are Better Buys

Amid backlash in opposition to Black Lives Matter, Afro-Latinos discover setbacks and alternatives