She thought it wouldn’t be “practical.”

“I thought that all you could really do with it was either teach or do research,” she said, “and I wasn’t really interested in either of those things.”

Yet, as it turned out, it couldn’t have been more practical: majoring in Spanish ultimately led her to an entire career dedicated to what she called “social work-y work” with the Triangle area’s Latino communities “without really being a social worker.”

For over a decade, Aguilar-Simon has worked to connect Spanish-speaking families with the resources they need primarily in Orange county. Now, she’s just expanded her reach: she’s El Futuro’s newest clinical project manager — and the first to head the bilingual mental health clinic’s outreach in Chatham. 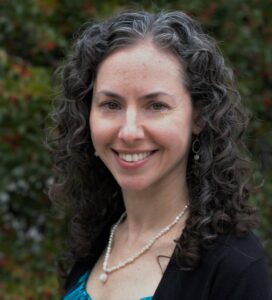 “We’ve been there at Chatham for many years providing services, but this is sort of a new effort to try to expand the reach of our services in Chatham and Orange,” she said, adding that she will be “doing some collaborative planning with others at El Futuro to plan how to spread the word that we can serve folks in Orange County and Chatham County even during the pandemic through our telehealth services.”

According to Kerry Brock, El Futuro’s director of advancement and strategy, Aguilar-Simon will also be working to monitor trends in requests for services from Chatham Latino families, “improve screening processes” to help families access services better and engage with partner organizations who also serve county Latino families. She’s still learning, but Aguilar-Simon said she plans to reach out to organizations like the Hispanic Liaison, Communities In Schools and Chatham-based health centers.

“Sabrina is perfect for this job because she is a Spanish-speaker, has lived in Latin America and can identify with the families we serve,” Brock told the News + Record. “She also has significant experience providing effective outreach and engagement with Latino families through other nonprofit programs, and ensuring service trends and goals are met so that more Spanish-speaking families connect with helpful resources in the community.”

‘I could not wait to learn Spanish’

Aguilar-Simon first discovered her passion for the Spanish language while attending elementary school in southwest Ohio. A woman from Spain came to her school to teach a short Spanish course, and Aguilar-Simon said she quickly became “enthralled” with the language.

Her mother, a clinical psychologist, had also both studied and taught Spanish; after seeing Aguilar-Simon’s interest, she decided to help foster her daughter’s interest.

“Because it was just this two-week thing and then it was over, I didn’t have a way to keep learning Spanish,” Aguilar-Simon said. “So she (her mother) made like a little Spanish workbook, where she drew pictures and made little sentences where I’d fill in the blank, and match things up. … And so ever since I had that little course in elementary school, I could not wait to learn Spanish.”

She kept up her study from elementary school on to college. Besides majoring in Spanish, she studied abroad in Spain and worked as a teaching assistant for several undergraduate Spanish courses. After graduating, she ended up living for a few years in Mexico while teaching English.

“After becoming fluent in Spanish through those experiences, I just had this idea that I wanted to be using my Spanish to help people in some way,” Aguilar-Simon said. “That was my vision and my drive and has really mostly been what I’ve done in my professional life, for almost my entire adult life.”

At that point, though, she wasn’t quite sure yet just how to best put her Spanish skills to work. While trying to figure it all out, she moved to North Carolina around 1995 to teach high school Spanish at Carolina Friends School in Durham.

In the early ‘90s, she’d considered moving to Chapel Hill before, since her sister lived there, but initially rejected the idea. Aguilar-Simon planned to make use of her Spanish to serve local Latino communities, and as far as she could tell, North Carolina at the time didn’t really host a significant Hispanic population.

A few years later, when she moved to North Carolina anyway, she still thought that was the case.

“Little did I know, that was right around the time that there was this beginning of this influx of immigration from mostly Mexico,” she said, adding with a laugh, “It turned out I couldn’t have come to a better place. I really love it, and so I’ve been here ever since.”

Aguilar-Simon taught Spanish for about three years at Carolina Friends; in a way, that experience allowed her to forge the connections she needed to kickstart her dream. At Carolina Friends, students often became involved in community service projects throughout the year. While searching for service work for her students, she began to learn about the area’s growing Latino population; she herself ended up volunteering at El Centro Hispano in Durham.

Through her volunteer work, she ended up finding work with various nonprofits and community health centers that served the fledgling Spanish-speaking community. Eventually, she joined Piedmont Health Services’ Carrboro Community Health Center around 2000.

“I was drawn to that because that program was serving families with all of the needs that they had,” she said. “Basically, it was a family support program, so it had a broad scope of helping get them connected to all different kinds of services in the community that they needed for their kids and for their family. And I really liked that sort of reach.”

Aguilar-Simon stayed with Piedmont for more than a decade, managing a children’s resource coordination program for Spanish-speaking families with children, birth to 5 years old. She left in 2011 to study speech-language pathology at UNC-Chapel Hill, from which she graduated in 2013.

Thereafter, she practiced clinical speech therapy  with Spanish-speaking children for about four years before moving onto to provide training and coordination for a childhood development research project at the Frank Porter Graham Child Development Institute. But her time with Piedmont, where she’d stayed the longest, perhaps provided the most direct link to her decision to join El Futuro.

While working at the Carrboro Community Health Center, she met Luke Smith, El Futuro’s founder and executive director. He had been doing his residency at the time, treating patients at Piedmont’s Carrboro center. When Smith started up El Futuro, Aguilar-Smith said she finally had a place where she could refer Spanish-speaking patients for mental health services.

“Since its beginning, I’ve always known El Futuro and very much admired and appreciated its mission and its services,” she said. “So when I saw the position for the clinical project manager, I was really excited about the opportunity, the possibility of being involved with that effort.”

In her new role, Aguilar-Simon said she hopes to help El Futuro expand its impact in Chatham County and other service areas. She also seeks to help destigmatize mental health services.

“I really hope to be able to just help El Futuro’s services reach more people and help broaden their impact in the Latino community,” she said. “(I want to) help folks who maybe wouldn’t have otherwise been able to get support for their mental health needs.”

And her colleagues have little doubt that she will.

“Our hope,” Brock said, “is that, through warm engagement and outreach from Sabrina, Spanish-speaking families in Chatham County will understand what services we provide, what challenges we might be able to help with … (and) feel more at ease and comfortable with reaching out to El Futuro for care.”

Chapelboro.com has partnered with the Chatham News + Record in order to bring more Chatham-focused stories to our audience.

All you need to know about head injuries

Boris Johnson has an extraordinary plan for Britain’s global role

N.H.L. Hopes to Extend Its Reach to Latino Audiences

Majority of people hospitalized for COVID-19 were overweight or obese, CDC study shows

Hispanic community wants the vaccine, getting them through the doors is the challenge, leaders say