Palestinian Authority Foreign Minister Riyad al-Maliki was stripped of a special travel permit for senior Palestinian officials and his entourage was questioned by Israeli intelligence on Sunday in an unusual incident following Al-Maliki’s visit to the International Criminal Court.

The PA Foreign Ministry was informed by Israeli authorities that Al-Maliki’s VIP travel pass had been canceled as the diplomat entered Allenby crossing from Jordan into the West Bank, senior PA Foreign Ministry official Ahmad al-Deek told The Times of Israel.

The VIP travel pass normally allows Palestinian Authority officials and staff to pass through Israeli checkpoints with minimal friction, but according to al-Deek, al-Maliki’s entourage was questioned by the Shin Bet security service at the scene.

“The minister was held up for around half an hour, and his staff was delayed for around an hour, all told,” al-Deek said.

The Allenby Bridge (also known as the King Hussein Bridge), a major land crossing between Israel and Jordan. (Flash90/File)

The Shin Bet declined to comment. An Israeli official confirmed the incident, but stressed that canceling al-Maliki’s pass was a one-time decision.

“If this is the case, we hope that the Israelis clarify this to us,” al-Deek said, noting that the PA Foreign Ministry had only been informed that the pass had been canceled.

The Israeli official declined to specify why al-Maliki’s pass had been revoked. The PA Foreign Ministry, however, said that Israel had cancelled the VIP permit due to Ramallah’s enthusiastic support for the ongoing ICC investigation.

“Israel is unable to solve cases through the law, but instead resorts to a policy of intimidation, sanctions and threats,” al-Deek said later in statements to the official Palestinian Authority WAFA news agency.

Al-Maliki was returning from a diplomatic visit to Europe that included a trip to The Hague to meet with outgoing ICC Chief Prosecutor Fatou Bensouda.

Bensouda announced early in March that she would open an investigation into actions committed by Israel and the Palestinians in the West Bank, Gaza, and East Jerusalem in the summer of 2014, but excluding the terrorist murder of three Israeli teens that started that escalation.

Her announcement was immediately welcomed by the Palestinian Authority and furiously condemned by Israel.

During al-Maliki’s visit to The Hague, the Palestinian diplomat urged Bensouda to accelerate the pace of the investigation.

“The foreign minister stressed…the importance of expediting investigations into the crimes committed in the territory of the State of Palestine, in a manner that ensures justice for the victims and their families among the Palestinian people,” al-Maliki’s office said in a statement. 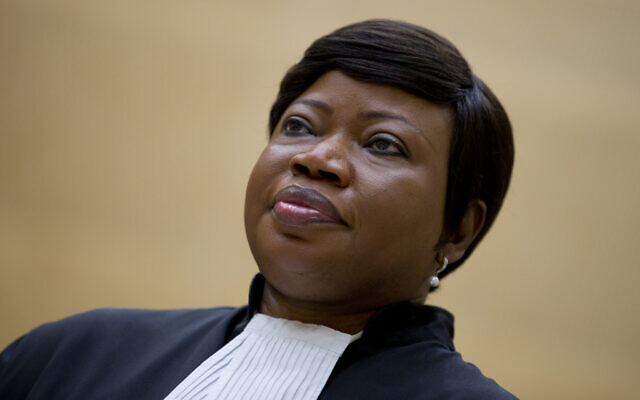 The announcement of the investigation came less than a month after the court ruled it had the jurisdiction to open a probe. A preliminary investigation to settle the justiciability question took more than five years.

On Thursday — the same day as al-Maliki’s meeting with Bensouda — the ICC confirmed that it had sent formal notices about its impending investigation into possible war crimes to both Israel and the Palestinian Authority.

The letters gave both parties one month to request the investigation’s deferral, the ICC said.


I’m proud to work at The Times of Israel

I’ll tell you the truth: Life here in Israel isn’t always easy. But it’s full of beauty and meaning.

I’m proud to work at The Times of Israel alongside colleagues who pour their hearts into their work day in, day out, to capture the complexity of this extraordinary place.

I believe our reporting sets an important tone of honesty and decency that’s essential to understand what’s really happening in Israel. It takes a lot of time, commitment and hard work from our team to get this right.

Your support, through membership in The Times of Israel Community, enables us to continue our work. Would you join our Community today?


Join the Times of Israel Community


You’re serious. We appreciate that!


We’re really pleased that you’ve read X Times of Israel articles in the past month.

That’s why we come to work every day – to provide discerning readers like you with must-read coverage of Israel and the Jewish world.

So now we have a request. Unlike other news outlets, we haven’t put up a paywall. But as the journalism we do is costly, we invite readers for whom The Times of Israel has become important to help support our work by joining The Times of Israel Community.

For as little as $6 a month you can help support our quality journalism while enjoying The Times of Israel AD-FREE, as well as accessing exclusive content available only to Times of Israel Community members.

Opinion: Does Asia’s superior response to COVID mean that the ‘Asian Century’ has begun?

Do I would like COVID-19 exams or vaccines for worldwide journey?

WEATHER CONDITION UPDATES: Troop F reporting wrecks in Montgomery County and between Jefferson Metropolis Lake of the Ozarks on US 54

iPhone 12 in purple hands-on: Should you buy it or wait for iPhone 13?

Jason Heyward Walks the Cubs Off for the First Time This Year! (VIDEO)