The Chinese wet market that spawned the global COVID-19 outbreak was classified as a potential pandemic risk as early as 2014, according to a Sunday report.

Evolutionary biologist and virologist Eddie Holmes said he was taken to the Huanan seafood market by Chinese health officials five years prior to the pandemic, to see an example of a place where a virus transmission could occur from animals to humans, The Telegraph reported.

“The Wuhan Centre for Disease Control took us there, and here’s the key bit, because the discussion was: ‘where could a disease emerge?’ Well, here’s the place – that’s why I went,” Holmes told the British newspaper.

“I’ve been to a few of these markets, but this was a big one – it felt like a disease incubator, exactly the sort of place you would expect a disease to emerge,” he added.

Workers wearing protective suits walk next to Huanan Seafood Wholesale Market in Wuhan, in China’s central Hubei province on March 30, 2020, after travel restrictions into the city were eased following more than two months of lockdown due to the COVID-19 coronavirus outbreak. (Photo by Hector RETAMAL / AFP)

Chinese disease control officials have previously identified wild animals sold in the market as the source of the coronavirus pandemic that has taken more than three million lives worldwide so far and rocked the global economy.

Holmes recalled the smorgasbord of exotic wildlife he had seen in the market, including fish, snakes, rodents, and raccoon dogs — many of which were alive.

The “crates of wildlife stacked [were] on top of each other,” he told the newspaper, adding that he remembers seeing one being beaten near him.

“An animal had got out or something, and somebody was clubbing it,” he told The Telegraph, “I think it was a raccoon dog, though I couldn’t quite see. It was pretty confronting.”

In January, a team of World Health Organization experts investigating the origins of COVID-19 visited the market in Wuhan, where one of the first reported clusters of infections emerged in December 2019. 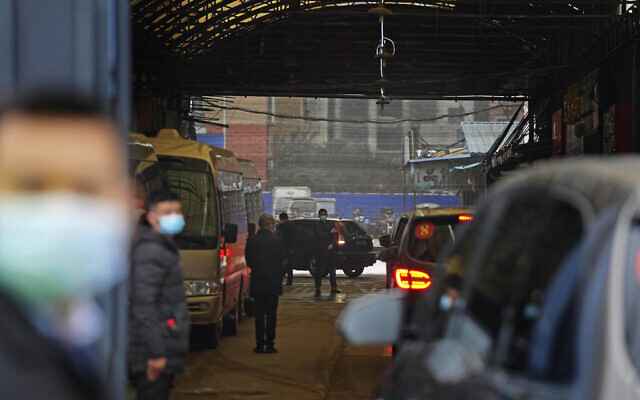 A convoy of vehicles carrying the World Health Organization team enters the interior of the Huanan Seafood Market on the third day of field visit in Wuhan in central China’s Hubei province on Jan. 31, 2021 (AP Photo/Ng Han Guan)

The market has been shuttered since January 2020 after the outbreak began to spread.

According to a draft copy of the joint WHO-China study obtained by The Associated Press, the transmission of the virus from bats to humans through another animal in the market is the most likely scenario and a lab leak is “extremely unlikely.”

The idea of a lab leak from the Wuhan Institute of Virology is a hypothesis that was promoted by former US president Donald Trump’s administration. Beijing has favored the theory that COVID-19 transmission came through frozen meat imported in frozen food packages.


I’m proud to work at The Times of Israel

I’ll tell you the truth: Life here in Israel isn’t always easy. But it’s full of beauty and meaning.

I’m proud to work at The Times of Israel alongside colleagues who pour their hearts into their work day in, day out, to capture the complexity of this extraordinary place.

I believe our reporting sets an important tone of honesty and decency that’s essential to understand what’s really happening in Israel. It takes a lot of time, commitment and hard work from our team to get this right.

Your support, through membership in The Times of Israel Community, enables us to continue our work. Would you join our Community today?


Join the Times of Israel Community


You’re serious. We appreciate that!


We’re really pleased that you’ve read X Times of Israel articles in the past month.

That’s why we come to work every day – to provide discerning readers like you with must-read coverage of Israel and the Jewish world.

So now we have a request. Unlike other news outlets, we haven’t put up a paywall. But as the journalism we do is costly, we invite readers for whom The Times of Israel has become important to help support our work by joining The Times of Israel Community.

For as little as $6 a month you can help support our quality journalism while enjoying The Times of Israel AD-FREE, as well as accessing exclusive content available only to Times of Israel Community members.

Microsoft’s xCloud beta arrives on iOS and PC this week