Whatever you’re reading this on is using a semiconductor device to make the web page appear. There is a good chance your family’s car has several semiconductors in it, and there are probably several in your kitchen, helping things like your washing machine or smart speaker work. In fact, they’re just about everywhere.

That is why a big shortage in them is a big problem for a lot of people – if you want to buy a PlayStation 5 or an Xbox Series X it’s one of the reasons you might be struggling to get one. It’s also why lots of big car companies have had to temporarily stop making cars. It’s affected Apple’s latest iPhones and Samsung has warned it could cause problems for supplies of their its phones. It’s even got American President Joe Biden worried.

The problem isn’t going away soon either, one expert, Richard Parkinson, told the BBC, “shortages for some products may continue for several months – possibly even in to 2022.”

So how did there come to be a shortage in the most useful thing you’ve never heard of? 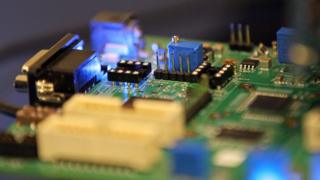 Semiconductors on a ciruit board

What is a semiconductor device?

In short, semiconductor devices are the building blocks for the computer chips which make all of the devices in our life work.

In a slightly more detail, semiconductor devices are the home for transistors and diodes, which are the brains of computer chips and how electricity flows through a devices, allowing it to operate, and then do things for us.

A report for the US government defined semiconductors as: “A semiconductor – aka microchip (or just chip), die, or integrated circuit — is also any “electronic device made from semiconductor material.”

The most famous semiconductor material is silicon. Silicon has the perfect qualities for a semiconductor – it will allow some electricity to pass through it, but not as easily as a metal like gold.

Silicon therefore acts as a foundation to fit parts to, allowing circuits, diodes and transistors to be built together. It’s this semiconductor device that people know as ‘chips’ in computers.

These can be incredibly complicated computer chips, like those found in games consoles, phones and car engines, which have enormous numbers of transistors on them to help execute many functions quickly. It can also be the relatively simple computer chips which help a toaster operate, or the chip in a car that helps a window roll up or down when you press a button.

“Semiconductors are arguably humanity’s greatest achievement to date,” says Jimmy Goodrich, who works for the Semiconductor Industry Association in the United States and promotes semiconductors.

And if you are wondering just how many transistors there are, well, the answer is a lot. A study in 2017 by electronics weekly forecast that more than 1,000 billion semiconductors would be shipped in 2018. That’s almost 150 semiconductors for each person on Earth…. just in 2018. 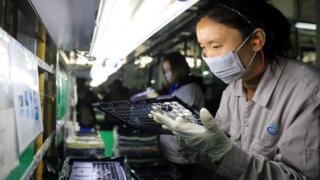 A worker checking parts in a factory in Lu’an City, in China.

Why is there a shortage?

If you look at the period during which the shortage started it is probably quite easy to guess what has triggered the shortage: the coronavirus pandemic.

The pandemic has meant that just as lots of us buy new items – whether that’s things like monitors and computers to help us work or be taught at home, or games consoles or new phones to keep us entertained at home – there’s also been a big disruption to semiconductor manufacturing.

The companies which make billions of tiny computer chips were disrupted like everyone else, but have then found getting back to work has been complicated. Not all chips are the same, so the companies have to work out how to catch up on orders.

Companies like Apple and Samsung order enormous numbers of semiconductors, so manufacturers have had to put companies who order small numbers to the back of the queue – and that’s bad for car companies like Ford. Cars have dozens of computer chips in them, but the value of their orders are much smaller than others so they have to wait. Apple, for example, spends more than $50 billion on computer chips each year, while Toyota, which is the biggest buyer of computer chips for cars, only spends about $4 billion.

Sony’s PlayStation 5 has a ‘custom-built chip’ powering it, as well as needing chips for things like the controllers. Xboxes and Switches are also full of computer chips. That means console manufacturers like Sony, Microsoft and Nintendo have to wait on chip makers to get their chips made before they can make a console for you to buy. 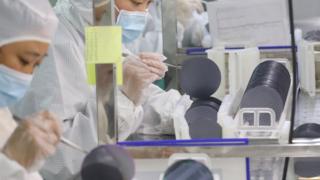 When will things be back to normal?

If you’re thinking, ‘that’s all good to know, but really… I’d just like to get hold of a new console as soon as possible, thanks,” then the news is mixed. Jim Ryan, the boss of Sony’s PlayStation department, has said, “it will get better every month throughout 2021.”

However, he did warn: “There are very few magic wands that can be waved.”

There was also mixed messages from one of the people in charge of Samsung’s mobile phone division. Koh Dong-jin said, “It’s hard to say the shortage issue has been solved 100 percent.”

“There’s a serious imbalance in supply and demand of chips in the IT sector globally,” he warned. That means manufacturers aren’t able to make (the supply) the same number that companies would like to buy (the demand). 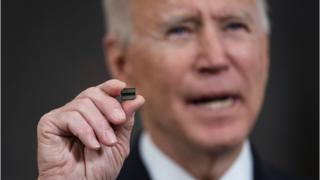 Is anyone going to do anything to stop this happening again?

Your struggle to buy a PlayStation 5 has gone right to the top: US President Joe Biden has recently been talking about the chip supply problem.

Though he’s more concerned about the impact of the shortages on jobs in the United States and the risks to security .

“I’m directing senior officials in my administration to work with industrial leaders to identify solutions to the semiconductor shortfall,” President Biden said in February. He said semiconductors, batteries for electric vehicles, rare minerals and pharmaceuticals that the US needed to ensure it always had a supply of.

However, not even the President can just make a chip-manufacturing plant appear.

“It takes about 18 to 24 months for a plant to open after they break ground,” analyst Richard Windsor told the BBC.

“And even once you’ve built one, you have to tune it and get the yield up, which also takes a bit of time.

“This isn’t something you can simply switch on and switch off.”

Will ‘chipageddon’ come to an end?

Yes, the supply will eventually catch up to the demand but, it might mean for a few months enormous companies like Apple, Sony and Microsoft have to warn people about how many of their new products there will be available to buy.

The impact will last for longer though. Many are suggesting the interest of politicians like Joe Biden in the shortage will mean there could be new factories built in places like the United States.

Well done for reading this far. Let us know what you think about this story and how important semiconductors are in the comments below.