The British Pound and Euro would both likely be losers in a spat over vaccines between the EU and UK, with the U.S. Dollar likely to benefit according to a number of analysts we follow.

Vaccines matter for the Pound which analysts say has benefited from the UK’s rapid vaccine rollout over recent weeks and in the first half of March it held the crown as the 2021’s best performing currency.

But this crown is at risk of slipping given increasing dissatisfaction amongst Eurozone member states with the bloc’s lacklustre vaccination programme, which they believe is in part due to a lack of supply from British-Swedish manufacturer AstraZeneca.

A solution being prompted by various European officials is to restrict the export of vaccines to the UK and other select nations.

“We note the increasing FX market importance of any further escalation of the post-Brexit tensions between the UK and the EU or the latest concerns about potential disruptions of the UK vaccination roll out. All of these considerations warrant a more cautious outlook on the GBP, especially vs the USD,” says David Forrester, FX Strategist at Crédit Agricole.

The European Commission and countries such as France and Germany have at various points over recent weeks expressed a desire to block the export of vaccines to the UK in the hope of bolstering the rollout in the EU.

Over the past weekend these calls grew louder and there have been numerous press reports that this Thursday’s European Council meeting will see leaders decide whether or not to block exports to the UK. Such a development would exacerbate concerns of supply in the UK, given warnings made last week that April was already likely to see supplies fallback and the programme slow.

“Near term, the pound is likely to remain driven by developments between the UK and its major suppliers of the vaccine, particularly given reports of a potential slow down in supply in the coming weeks,” says Nikesh Sawjani, an economist with Lloyds Bank.

Reports suggest Prime Minister Boris Johnson will attempt to dissuaded the Commission and member states from taking such action over coming days, while Ireland’s Taoiseach Micheál Martin told Irish broadcaster RTÉ he is against the EU placing export bans on Covid-19 vaccines, describing it as a “retrograde step”.

The imposition of a ban could slow down the UK’s vaccination drive, although it is too soon to say specifically to what degree.

Nevertheless, from a foreign exchange perspective the spat generates uncertainty and since the 2016 EU referendum the Pound has shown itself to be highly sensitive to such uncertainty.

The Pound-to-Euro exchange rate rallied as high as 1.1717 last week but the market is showing itself unready to break to fresh one-year highs above this level.

Rather, it is against the Dollar where weakness is most apparent: the Pound-to-Dollar exchange rate had gone as high as 1.42 by late February but has over the course of March edged back to the 1.38s that we are currently seeing.

A number of foreign exchange analysts are meanwhile saying the Euro is equally exposed to Dollar strength, given the Eurozone’s obvious struggle to match the U.S. and UK in vaccinating its population.

“Near-term divergent fiscal, vaccination and infection trajectories could temporarily test the narrative of a synchronised recovery. Across most of the Euro Area, vaccine rollout has been slow, and new cases are surging,” says a weekly foreign exchange briefing from Barclays. 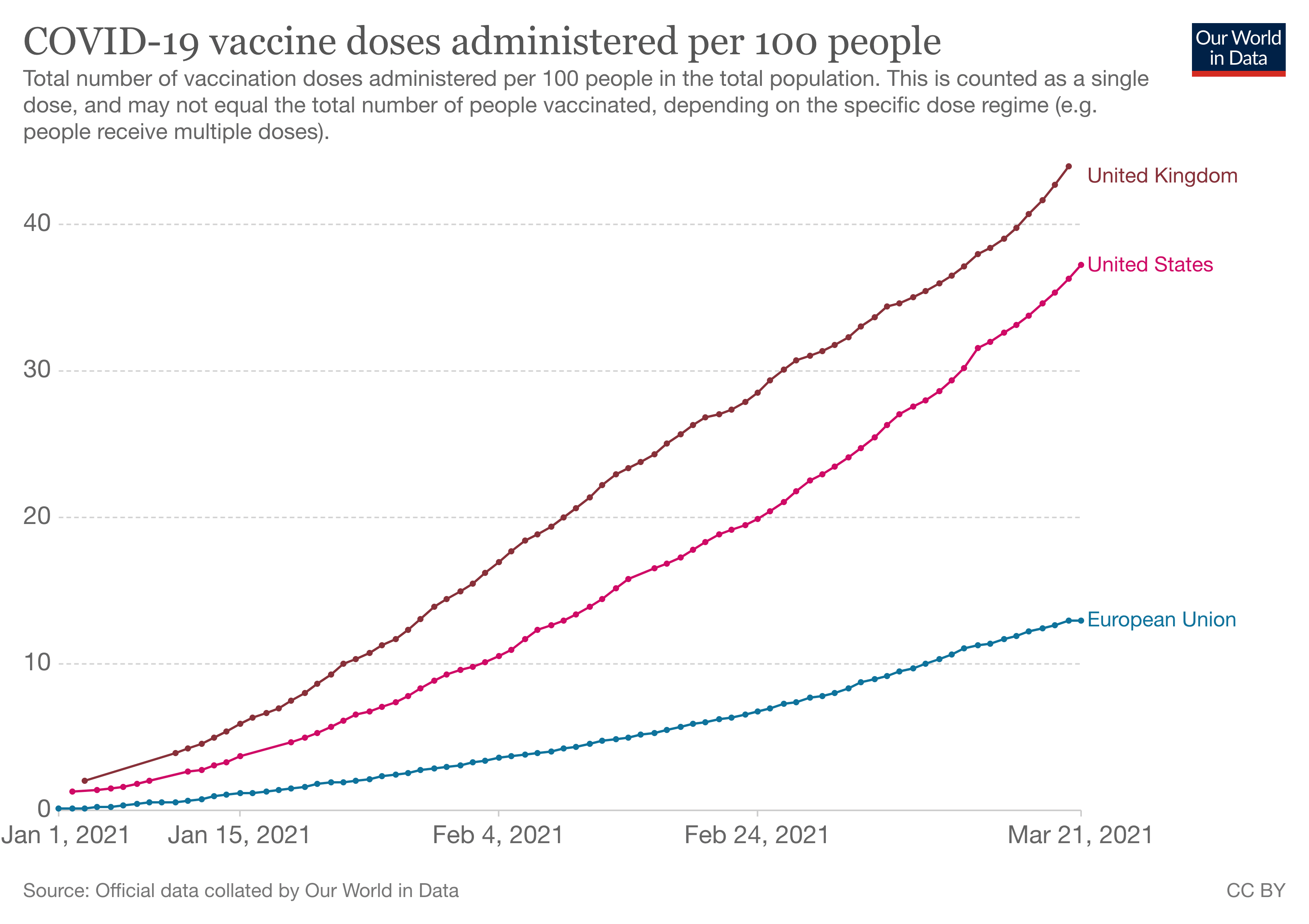 Barclays warn that for the EU it is not just a question of supply that could stunt the rollout of the jab and warn of an added hesitancy amongst EU citizens to take the AstraZeneca vaccine in particular.

This is a result of the incredibly chaotic approach to this specific vaccine by the EU’s member states.

“We think that vaccine reluctance could be a much more persistent factor in denting EA’s vaccination campaign, highlighting the role of social capital during the recovery,” says Barclays.

A number of EU states have in March suspended the use of the AstraZeneca vaccine, fearing it causes blood clots in some recipients. However, the European Medicines Agency last week doubled down on the message that the vaccine is safe, leading to a number of states allowing it once more.

Despite this, the vaccine’s reputation is damaged with YouGov saying their latest research now shows Europeans see the AstraZeneca vaccine as unsafe given the confusion of recent weeks.

“The potential for further halting/delaying of vaccines is perceived as detrimental to the growth pick up story,” says Barclays.

In YouGov’s previous survey in Germany, 43% said they believed the vaccine to be safe, compared to 40% who considered it unsafe. As of now, a majority of Germans think the vaccine is unsafe (55%) and just a third think it safe (32%). 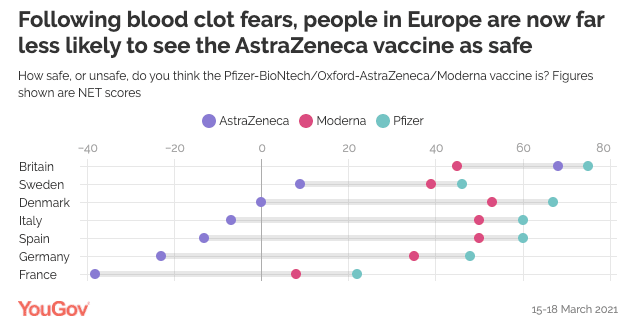 In France, where people had already considered the vaccine unsafe (43%) than safe (33%), those figures have now worsened to 61% unsafe and 23% safe.

In Italy and Spain, most people had previously felt that the AstraZeneca vaccine was safe (54% and 59% respectively). Since then those numbers have fallen to 36% and 38% – in both cases lower than the proportion who feel the vaccine is unsafe.

“Social capital (particularly trust in neighbours and institutions) will likely play an important role in the rebound in economic activity as lockdowns begin to ease: it is not a policy ‘light switch’; people will make their own choices that will have a determinative effect on recoveries,” says Barclays.

Barclays tell clients they maintain their bearish view on the Euro.

“We have revised lower our euro-area growth forecast for 2022 from 5.3% to 4.3%. This implies that the euro area output gap will not close by the end of 2022 and the underlying inflation will stay below ECB’s target,” they say.

While the UK and Eurozone fret over vaccine supplies the U.S. pushes ahead with its own inoculation programme and faces no supply issues.

In addition a sizeable stimulus from the government is expected to accelerate economic activity. And, there is also potentially more stimulus to come which promises to accelerate the feel-good factor towards the Dollar.

Barclays expect the U.S. government to now shift attention on an infrastructure stimulus package given the progress of U.S. vaccination efforts.

“In the US, more fiscal stimulus is in the pipeline,” says Barclays. “We expect President Biden to outline his proposals in his first speech to a joint session of Congress – which may be in April – and target passing legislation later this year.”

Barclays estimate that a $2trn plan can raise the level of 10y yields by 30bp-50bp above their estimated fair level in a year’s time, currently at 1.75% (essentially close to spot).

The net result for foreign exchange markets is meanwhile expected to be one of further Dollar strength.

“The impact would depend not only on the size of the plan, but how accelerated it is and how the market expects the Fed to react to it. Persistently higher yields and brighter US growth prospects should bring support to the USD against non-commodity G10,” says Barclays.

Shane Waldron excited to bring Gerald Everett along to Seahawks

Android apps crashing? Here’s what you can do to fix the problem

EURUSD slumped on COVID resurgence, slow progress of vaccinations but recovered on ease of US bond yield

N.J. school district is streaming meetings in Spanish. Others should too, advocates say.

Biden strengthens Obama’s legacy while seeking his own